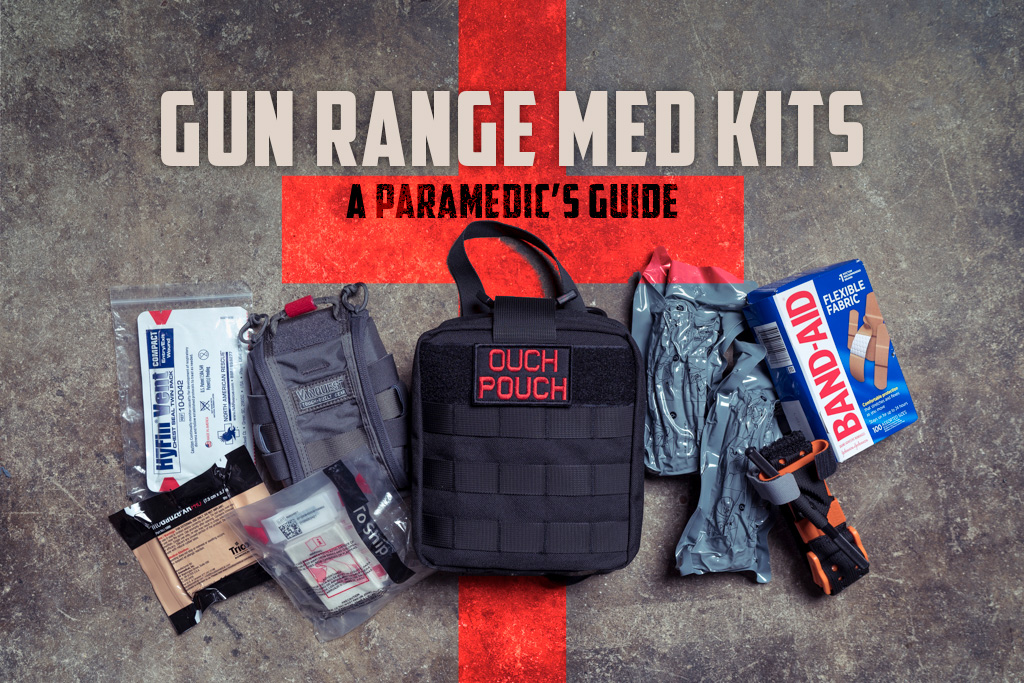 Med Kits: Everything You Need For The Gun Range
by Gideon Zielinski June 7, 2022

Everyone who owns a gun should own and carry a gun range med kit. We all know accidents happen; however, being prepared can mitigate disastrous outcomes. When an emergency happens at the shooting range, be ready to help. In this guide, you’ll learn how to build rock-solid gun range med kits.

A gun range trauma kit should have the equipment to treat life-threatening bleeds, as hemorrhage accounts for most preventable deaths. Also, minor injuries, such as cuts, scrapes, and sprains, should not be overlooked.

Oddly, many people don’t carry a medkit at the shooting range. This is unwise. Whenever you have a firearm in hand, a few lifesaving medical supplies should be within reach.

Let’s begin with the most important first aid gear for the shooting range. While this discussion will be about gear to help you after an injury, the best protection from injury is prevention. Teaching new shooters at the range the principles of firearm safety will do the most to keep people safe.

Here’s some helpful info on using these items.

The tourniquet and packing gauze are atop the trauma kit food chain. With these two tools, you can handle most trauma injuries. Even the packaging from the combat dressing can be used as a make-shift chest seal.

A tourniquet can stop bleeding to the arms or the leg. And, considering many gun owners wear ballistic vests, the arms and legs are some of the most vulnerable areas. If you’re curious, you can watch this video by STOP the BLEED on how to use a tourniquet.

The two best tourniquets by most standards (and the two most common) are the SOF-T by TacMEd, and the CAT, by North American Rescue. Buy genuine tourniquets—no cheap knockoffs. If you’re paying under $30 per tourniquet, it’s probably an inferior knockoff with sub-par quality standards. Don’t cheap out! This is life and death.

Be sure to read our guide to the different types of tourniquets (you’ll also find more information on how to use a tourniquet).

Honorable mention: Pressure bandages, such as the Israeli bandage, are awesome, and they work well for bleeds that don’t require a tourniquet. However, know that it’s relatively simple to make a pressure bandage from a roll of packing gauze.

Medical packing gauze, also known as compressed gauze, is a gauze roll used to dress and pack wounds. Packing gauze is cheap, easy to carry, and can be lifesaving. The packing gauze picks up where the tourniquet leaves off. Traditional tourniquets are only good for the arms and legs – they are not made to stop bleeding from the junctional areas (the armpits or the upper groin).

Packing a wound is an effective technique for stopping a major bleed. However, you need the right tools. You can even buy hemostatic gauze (under the names combat gauze, chitogauze, quickclot, and more). This gauze is impregnated with clotting agents to stop the bleed faster.

Watch this video to learn how to pack a wound. You can pack wounds on the arms and in the junctions (including the neck), but wound packing is less effective for the torso (chest and abdomen). For that, you’ll need a chest seal.

After the tourniquet and the packing gauze, you have the chest seal. As the saying goes, tourniquet the limbs, pack the junction, and seal the torso.

What’s the purpose of a chest seal, and why do you need one? Gunshots or stabs to the chest or abdomen can allow air into the intrapleural space (the lung cavity). This air builds up and begins to collapse the lung and push against the heart.

Chest seals work by sealing the holes, preventing air from being sucked into the lung cavity. These chest seals usually have a valve that allows any air building up around the lung to be released. Some of the best products are Hyfin chest seals. These pack easily and get the job done.

Chest seals aren’t just for the chest. You can also place them on the back (top and bottom) and abdomen. Why? When you take a deep breath, the bottom of the lungs extends further below the chest than you might think, so it’s important to take precautions and seal the entire torso. Also, even if the lung cavity wasn’t punctured, the chest seal will protect from infection or evisceration.

It’s important to understand the “why” behind your gear, so here’s a video to watch on the dangers of tension pneumothorax and how to use a chest seal.

If you have a tourniquet, packing gauze, and a chest seal in your gun range med kits, you’ve covered your bases. From these, you can improvise most other medical supplies.

However, there are several more items you should carry to even out your kit.

Once you have your bases covered, you can expand the kit as you’d like. Below, we talk about some common secondary first aid items for your gun range med kits or IFAK (individual first aid kit). This is not an all-inclusive list, but it’s a strong start.

Here are some secondary items for your gun range trauma kit:

Note: Unlike the tourniquet, gauze, and chest seal, these items may or may not be on your person while shooting. However, they should be close by.

If you accidentally shoot yourself in the leg while out in the woods, having a med kit in your truck is of absolutely no value. If you’re carrying a gun, you should be carrying a med kit. Sure, have a kit in your vehicle. Just make sure you have something on your person as well.

How to carry med kits at the gun range:

Just like you practice your firearm operation, you should train your first aid skills. We hear a lot about “basic” first aid – this is misleading. There’s nothing simple, easy, or basic about first aid. During an emergency, hands will shake, breathing will quicken, and minds spin.

Anyone who has been in an emergency situation will tell you: tunnel vision is real. You need to train. Training is the only way to ensure you make good decisions during a life-threatening event.

Carrying a medical kit at the gun range isn’t just for you. It’s for friends and family who may also sustain an injury. The best way to ensure you carry a med kit while shooting is to carry a med kit everywhere. Make it a habit. Brush your teeth. Take a shower. Carry a first aid kit.

There are many pocket-sized medical pouches that make carrying a med kit simple. Find one that works for you and carry it every day.