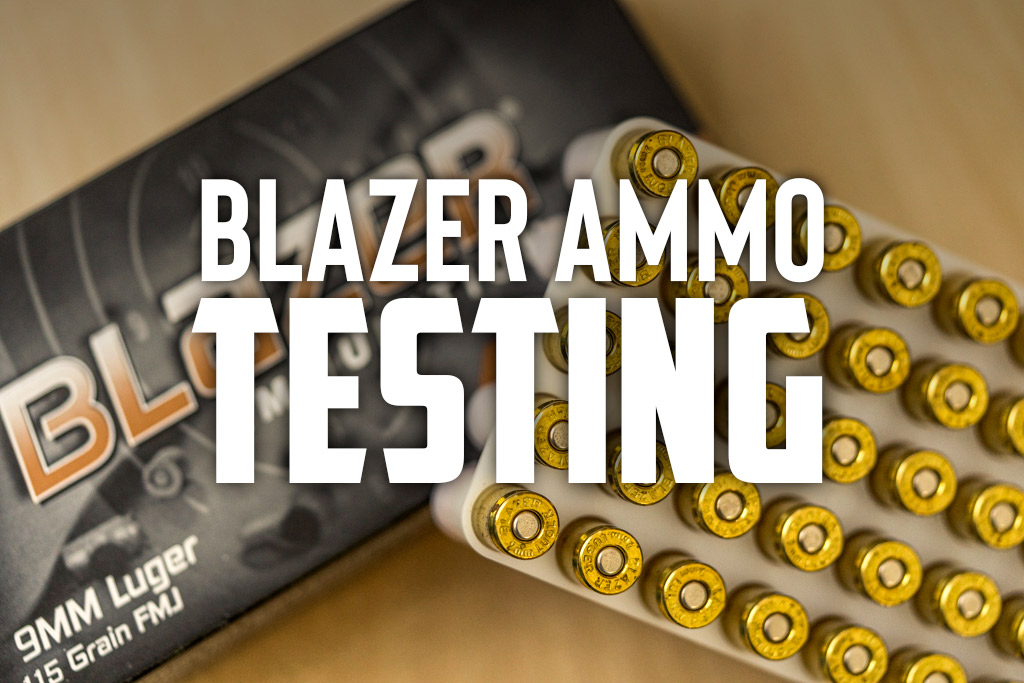 Blazer Ammo Review: Is It Any Good?
by Kenzie Fitzpatrick September 8, 2021

Is Blazer ammo any good? We get asked that question a lot. It tends to be lower on the pricing scale, similar to imported ammunition. We spent some time at the range with Blazer centerfire ammo cartridges to find out if it’s reliable ammo, if it will feed in a variety of firearms, and if it is accurate. Check out our review of this popular 9mm ammo below:

Where did Blazer come from? Blazer ammunition has a unique history and you may be surprised to find out how small the ammunition industry really is. To even get to the Blazer ammunition line, we must first start with the history of Speer and Cascade Cartridges, Inc., or what you may recognize as CCI.

Vernon Speer created a successful component bullet business in Lewiston, Idaho when Richard Speer (his brother) decided to join him in the reloading business. Richard’s machinist background helped him create the famous Weatherby and Newton rifle cartridge designs. In 1951, CCI was born and pivoted from case-making to component primers. Business boomed and CCI began building modern labs, manufacturing buildings and purchased property for expansion, all of which are still occupied by the company today.

As CCI grew, they began manufacturing rimfire ammunition in addition to components. In 1981, CCI developed a new line of centerfire ammunition, Blazer ammunition. At the time, it was aluminum-cased. Since then, they’ve also made Blazer ammo with popular brass casings as well.

What many consumers don’t know is that ammunition companies provide safety data online about the specific ammunition they make. These data sheets provide all of you basic handling and storage information and even transport information when shipping ammunition. Blazer ammunition, along with Gold Dot, Independence, Lawman Ammo, and Speer, have their own data sheet available online.

From 25 Auto to 44 Remington Magnum, Blazer also makes a variety of bullet weights in grains:

Blazer Brass handgun ammunition is what we would recommend using in shooting competitions, practicing with your concealed carry pistol, or in picky guns that only like certain ammo such as pistol caliber carbines. These cartridges are made from reloadable brass and are the only line of Blazer products that are recommended for reloading. These are made with the reliable primers we have come to know and love from the CCI brand and with clean-burning propellants. Not to mention, this ammo is always on the more affordable side.

Blazer aluminum ammo is made the same, but with aluminum casings rather than brass. However, these cases are not reloadable and are marked as NR to indicate this. Blazer also warns that this ammo not be used in carbine-style firearms, sorry PCC shooters! Aluminum rounds are even cheaper than their brass counterparts and make great practice shooting ammunition.

A less commonly found line of ammo from Blazer is their Clean-Fire ammunition. In addition, Blazer Clean-fire is a non-toxic solution for shooting without the harmful effects of lead, barium, and antimony being released into the surrounding air. One of the biggest issues with indoor shooting ranges is that their ventilation system has to be up to code to pump out toxins so shooters do not get lead poisoning. This ammunition was specifically designed for indoor use so you can shoot with a little more security knowing you won’t be exposed to lead. These cases are also non-reloadable and shouldn’t be used in carbine rifles.

We got our hands a case of Blazer Brass 9mm luger to try in a few firearms. We tested the standard 115-grain bullets as they are more commonly found than 124 and 147-grain bullets. I wanted to start out ammo testing in one of the pickiest guns out there, my pistol caliber carbine. Whether you’ve built your own or purchased one off the shelf, PCCs are notorious for failure to feeds, double feeds, failure to fire, and failure to eject. If you haven’t had an issue, you haven’t shot enough or tested enough ammo. If you have, then you know what I’m talking about.

To my surprise, my PCC ran 25 rounds clean right away without any issues. The round nose tips perfectly fed into my chamber even without a feed ramp. The brass ejected properly and there were no light strikes on the primers. The velocity was a little bit higher than what Blazer has listed online because their test barrel length was out of a 4-inch barrel. Even with the added velocity, the recoil impulse was still low and manageable. Most lighter bullets with higher velocities will cause more movement in the gun, but every now and then, well-loaded ammunition will run softly through the gun. In my book, if a PCC will run it, any handgun will run it as well.

I carry a trusty Glock 43 and like to try out different ammunition in it any chance I get. Why? If ammo continues to be scarce or certain ammunitions are easier to find than others, I need to know what all will or will not run reliably in a gun with a purpose to save my life. I carry my gun every day of my life. That means rain, snow, sunshine, and a whole lot of body sweat. I clean my pistol regularly and make sure it’s oiled, but daily carry can change these conditions quickly. Also, water-based lubricant will evaporate quickly as well, leaving a gun dry and on its own to run.

The boxes of 9mm Blazer Brass I received for testing all passed my personal inspection for quality and consistency. The cases were all accurately sized with correctly seated primers. Do you check your ammo before you shoot it? If not, you should. You don’t have to be a professional to see any irregularities in ammo so slow down and inspect your rounds.

Inspect the ammunition from all sides. Are there any primers that look out of place? Are there any rounds of ammunition that are shorter, or taller than the rest? Perhaps the bullet was seated too far into the brass casing making for a much shorter round. Any minor defect can cause malfunctions in firearms. You may have issues from not being able to feed into the chamber to not firing and even to causing a squib load.

If you are a regular shooter or are looking to get into competitive shooting, a handy tool to have is a case gauger. A case gauger is used by people who reload their own ammunition to test that they’ve loaded a round of ammo correctly. This tool is also commonly used to test rounds of ammunition in guns that require a certain length of ammo in order to feed properly.

Without any quick maintenance, I loaded up my Glock 43 and shot several rounds of Blazer Brass ammunition through my slightly dry, and a little stiff, pistol. The ammunition shot well through the gun without any major grip issues. Velocities were close to box speed, even though the barrel length of a Glock 43 is 3.39 inches vs the test barrel length of 4 inches. Depending on what carry ammunition you use, the 115 grain loads from Blazer may be on par if not, a little lower velocity than most jacketed hollow points.

Last but not least, I tested it out in my Canik SFX pistols (5.20″ barrel) that have been modified to only run certain loads of ammunition. In fact, these Canik’s feature lightened springs, tungsten guide rods, and all new triggers as well. Whenever you change the internals of a firearm, especially lightened springs, you can run into issues of not having hot enough (fast) loads to run through the gun. In fact, the full metal jacket 115-grain bullets shot great out of the gun, and the brass ejected as it should.

Accuracy was never in question during any of the tests. With higher velocities, the bullet drop is a lot less dramatic than heavier bullets and slower velocities. From the compact handgun to the full-size guns and through the troublesome PCC, Blazer ammunition has my stamp of approval.

Before sticking your nose up at brand names or ammunition too soon, try it out for yourself. I shot several hundred rounds through two pistols and my PCC rifle with no issues. There were no issues with cycling the ammo. All of my magazines fed the ammo well and I would personally not hesitate to use Blazer ammo for my next trip to the range.

If you have a variety of guns chambered in the same caliber, try shooting the ammunition through each one to put it to the ultimate test. In fact, keep a log of what ammo does and doesn’t feed through each of your firearms. The more you know about your firearm, the better prepared you will be in the future. And grab you a box of Blazer ammunition next time you spot it on the shelf!

Kenzie Fitzpatrick is a competitive shooter, firearms instructor, published writer in the industry, and the host of the Reticle Up podcast.