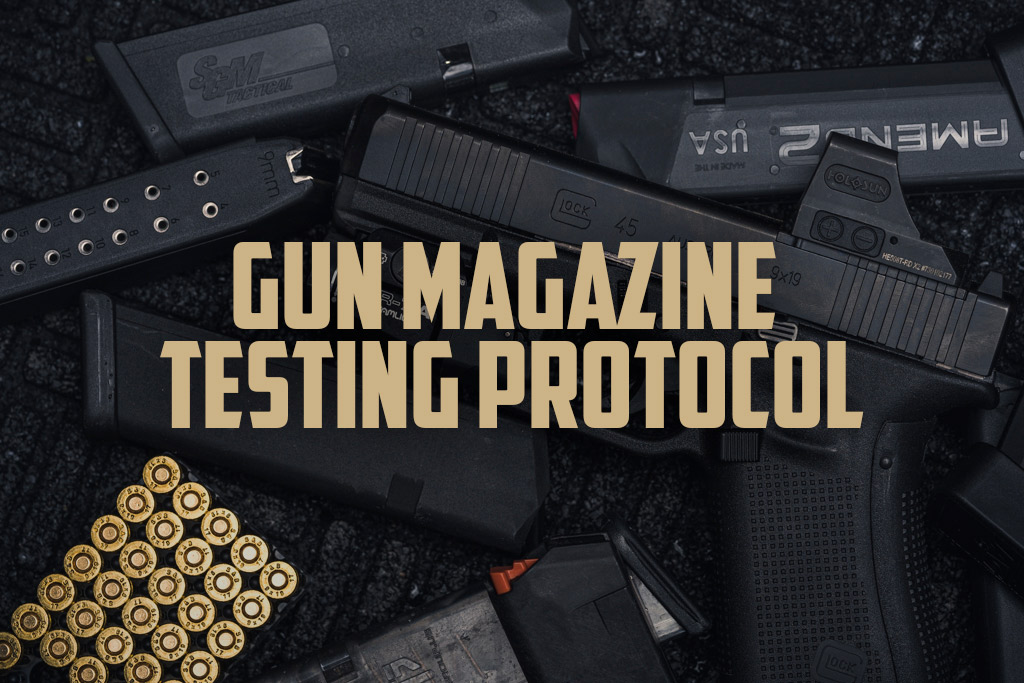 If you’ve been searching for real-world gun magazine testing, you’ve come to the right place. We created 9mmmagazines.com with the intention of doing one thing, testing and reviewing gun magazines. That’s not to say we won’t have other content on the site, but to let you know what our focus going forward will be. The variety of gun magazines available on the market can be overwhelming. Our goal is to provide consumers with accurate testing data to make educated purchasing decisions.

What does it take to do gun magazine testing? A lot of ammo, a lot of patience, and some good old-fashioned elbow grease. It helps if you have a basic understanding of engineering and watched a lot of MacGyver growing up. Our indoor lab has the facilities and equipment needed to perform testing in a controlled environment. That’s not to imply or give the impression that we are scientists. But rather to explain the logic, design, and processes used in our testing.

What happens if the magazine we are testing fails? If a gun magazine fails at any point during our testing, we’ll tell you why it failed and provide key data points. We’ll publish the data for you exactly the way it was recorded during our testing procedures. Our goal with gun magazine testing isn’t to prove that one brand is better than another. Each magazine will be subjected to the same treatment and real-world testing to find its flaws and weaknesses.

Our guarantee to you is that we’ll publish the data exactly as it’s recorded so that you can make your own decisions about what products work best for your needs. Take a look at our gun magazine testing protocols below:

Our approach to gun magazine testing is to employ the KISS (Keep It Simple Stupid) method. There are no governing bodies, or scientific institutes publishing guidelines on how to correctly test gun magazines. So we created our own standards and practices based on decades of real-world experience and published data from the US Military and companies in the private sector. With that knowledge and data, we put together a six-stage comprehensive test.

Concept: Visual inspection of the fit, finish, and welds/seams of the magazine for any manufacturing defects. We will examine the spacing and fit of the magazine when correctly seated in the gun. Observe if the slide/bolt locks open after the last round has been fired from the magazine.
Procedure: Compare the fit and finish between OEM and 3rd party magazines, check for performance issues due to poor seating, inspect feed lip spacing, using calipers or other measurement devices to record data if needed.
Proof: Look for variances in fit and manufacturing tolerances between OEM and 3rd party magazines, look at finishing differences, and diagnose potential issues after firing the weapon. Fit will be recorded as poor, good, or excellent in the testing data.

Concept: Collect data on damage caused by dropping loaded magazines from a set height.
Procedure: Dropping loaded magazines onto a concrete floor, base first, from a height of 6ft. The drop area is a marked 24″x24″ section of a concrete floor. Each magazine will be dropped twice from the set height then examined for damage.
Proof: Inspect the loaded magazines for damage from impact with the floor. Test for failures to feed due to impact damage, while firing a select number of rounds. Record data on if the magazine holds ammo securely, or loses it on impact with the floor.

Concept: Test for magazine failures due to environmental elements that may occur when using gun magazines in outdoor locations.
Procedure: Three testing tanks, one full of water, one full of sand, one full of topsoil. The loaded magazine passes through each tank once from front to back. After passing through each tank, the magazine is loaded into the firearm and a select number of rounds are fired.
Proof: Inspect magazine for seating issues due to debris. While firing a select number of rounds, test for failures to feed, jamming, extraction or, other common feeding issues due to debris. Any gun malfunctions not specific to the magazine during environmental testing will be recorded, but not necessarily included in the testing data.

Concept: Collect data by discovering the crush point of gun magazine materials and construction. Magpul set an industry standard by crush testing magazines at 9,000 Lbs. We will be able to take it a step further if needed, by being able to accurately measure crush testing up to 10,000 Lbs.
Procedure: Utilizing a ten-ton benchtop hydraulic shop press with a calibrated 10,000 Lbs load sensor, and digital scale indicator gauge to crush test gun magazines and collect data. The objective is to see at what weight the exterior shell of the magazine fails. The PSI will be presented in FT-LBS in the testing data. Data collection will begin at 1,000 Lbs and continue to 2,000 Lbs and beyond when needed. For simplicity, recorded numbers will be rounded up/down based on the numeral 5 (lower than rounds down, greater than rounds up) in testing data.
Proof: Observe and collect data while finding the breaking/failure point for each magazine. Inspect the effects of crush testing on the magazine’s structural material, exterior construction, and tensile strength. If possible, shoot a select number of rounds from the magazine to test for failures and feeding issues.

Our testing falls in line with evaluating the functional ability of gun magazines and assessing what causes them to fail. By gathering data, we can determine what caused the failure and pass that information along to you, the consumer. Are all of these testing scenarios likely to happen to the average gun owner on their way to the local range? No, however, we believe that pushing these magazines to their physical limits gives us a better understanding of how they will perform in various scenarios over a set period of time. Thank you for visiting 9mmmagazines.com we hope you find our testing data helpful and informative.